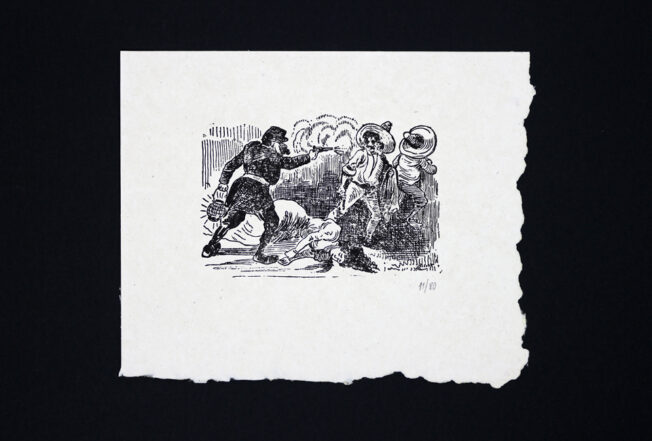 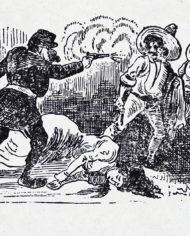 Zincography printed on handmade paper (2019), in Mexico City, from reproductions of the original zinc plates used by José Guadalupe Posada.

Zincography printed on handmade paper (2019), in Mexico City, from reproductions of the original zinc plates used by José Guadalupe Posada.

Sent in a cardboard envelope.

José Guadalupe Posada (1851, Aguascalientes – Mexico City, 1913) was a worker of the press who begin to make a living in the years in the Mexico of Porfirio Diaz, characterized by political instability and by a beginning economic development. But he was much more than that. He was an eminent late nineteenth-century graphic artist, the master of all the great Mexican artists of the first third of the twentieth century, who defined such a powerful aesthetic which is still dominating all Mexico. He worked until his death on 20 January 1913, at the age of sixty, in great poverty.

The contemporary graphic artists followed above all the French art in search of models. Posada turned to the earlier Mexican tradition and used it en masse, from pre-Columbian references to the advertising posters of the taverns and pulque houses. Late nineteenth-century Mexican artists would have never thought that one could lay the foundations of a future art with these scraps. The revolutionary Mexico, however, was suddenly in need of a strong self-definition which in a way could justify the closure of the borders and the end of the cosmopolitanism that had marked the creators of the previous years. And there was the immense work of José Guadalupe Posada on which a new, unmistakable aesthetics could be found, which nowadays seems to have always been the soul and essence of the people of Mexico.