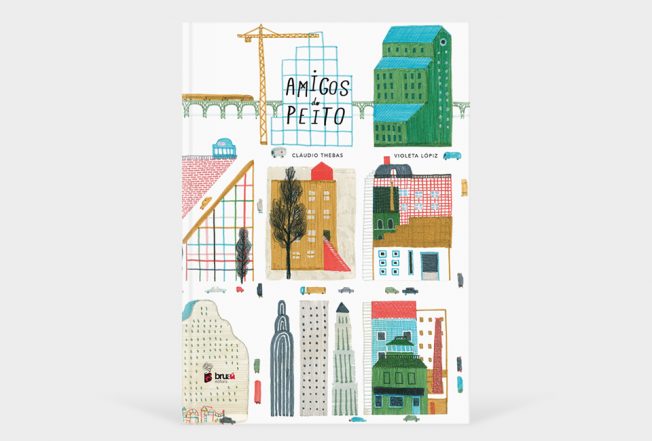 FRIENDS FROM THE HEART

In this book* we are taken by the hand of a little boy that lives in a neighborhood like many others. He wants to talk about his friends, his friends from the heart. For that the little boy takes through the streets of his neighborhood. Funny enough this neighborhood is quite similar to ours: there’s a school, a bar, a house on the corner, a garden, high buildings. But the streets and the houses aren’t the only thing familiar, also the little boy’s voice sounds familiar, quite like ours… And the friends that he talks about seem like our own, because we all have best friends and we play with them in a neighborhood just like this one. This common ground that we all recognize, because we are all made out of friends and places. A poetic text by Cláudio Thebas wonderfully interpreted and amplified by the beautiful illustrations of Violeta Lópiz. Bruaá

*Includes English translation on a separate sheet of paper.

Violeta Lópiz was born in Ibiza in 1980 and begins to illustrate very early, with 2 years. Her most productive and creative period develops up to 6 years, then she virtually loses all her artistic skills due to a very common mental illness in children: growth. When the disease reaches all its splendor she gets a job at a music school as a teacher and that's how after her young students inflict her blows with the blades of the xylophone, she starts to recover some creative skills. She performs her delearning at Art School nº 10 in Madrig, where she unlearns that work is something undesirable and forgets that being older is being boring. She does her internship at El Mundo newspaper to restart the scrawl and gradually begins to receive orders for several publishing houses that ask her to play again. Even though her irreversible condition, her slow advances give her great satisfaction and allow her to communicate with the teachers of tender age. Her progress can be found in some bookstores, walls, streets, fairs, newspapers and thousands of notebooks that she leaves scattered around.

My full name is Cláudio Álvares Machado Thebas. It's been a long time since I was born: 1964. It was here in Brazil, in São Paulo, in the middle of a revolution. As a matter of fact, it doesn't even seem that long. I remember it like it was yesterday when I was six years old and was crying a lot on time for school. Many times my mother had to stay there, sitting at the door of the class. Then I got used to it and she didn't have to do that shift. I remember a lot of laughter watching The Three Stooges, trips to the beach in the summer holidays. It was in one of those holidays that I learned to drive in my father's lap. Later, to my happiness and despair of the neighbors, I started to play the drums. I was thirteen. With fifteen, I set up my first band: Viscera. Is was punk rock. Today I realize that my neighbors were saints, even the front neihgbor, that called the police several times in the hope of being able to rest. Even the a saint's patience has its limits. Growing up, the battery stayed behind, but not that much. Today, I went back to playing. Not as a musician, but as clown, that I decided to become with more than thirty years. Before, in my twenties, I became a father. Of Luiza and Raphael. I'm also a stepfather, of Sophia and Bianca. And I'm the husband of Chris, the most beautiful woman in the world. We live in a House that has a big backyard, where our other four loved ones run: Jimi, Uruanã, Nemo and Suki. Who can guess their breeds of them wins a package with the oranges and tangerines we have in the Orchard!