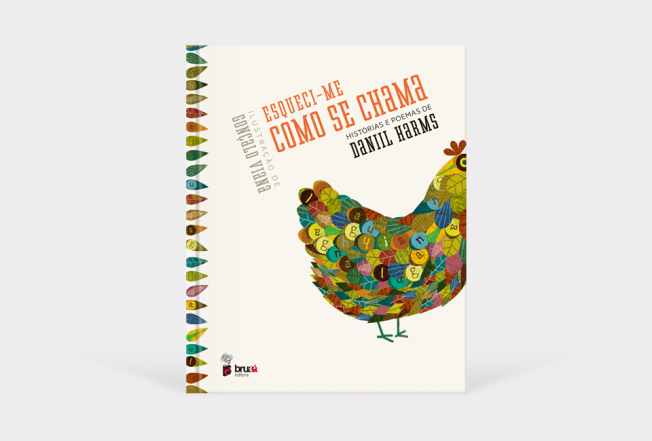 I FORGOT WHAT THE NAME WAS

10 children’s stories by one of the most original voices of XXth century Russian literature: Daniil Harms.

10 children’s stories by one of the most original voices of XXth century Russian literature: Daniil Harms. A good sample of his work for children, where, as few, he manages to capture children daily life, their play behavior, adding to it the right amount of fantasy and absurd. Everything is played within the reader’s counter of expectations face to conventions. The use of formulas already internalized, as the traditional folktale or fable, only serves his interests in order to deconstruct them: his narratives always move in the opposite direction to what is expected, constantly challenging ourselves and welcoming the reader as an equal in a constant game of language that encourages us to discover the other side of the mirror, opening new realities and, ultimately, transforming the world. Bruaá

Gonçalo Viana started his illustrator carreer in 1983. He was eight years old. He had just finished illustrating his first book, “The Super-Parrot”, authors edition of one single copy ina home made paper. Quickly he got to the conclusion that when he grew up he wanted to be, as he called it at the time, a draughtsman. Meanwhile it happened an architecture course in Lisbon and some working years in London. In 2002 he finally started the career that he had always dreamed of. From architecture perdured the geometry, that soon marked is graphic work. His illustrations have a regular presence in Portuguese publications, and also foreign ones such as New York Times and HOW Magazine. In 2004 he received the Award of Excellence da Society for News Design (SND and in 2008, the Grande Prémio Stuart de Desenho de Imprensa. In 2011 he was included in the selection "200 Best Illustrators Worldwide" of magazine Lüerzer's Archive. His work on the book “Esqueci-me como se chama” ( I forgot it’s name) got an award by 3X3 Magazine in its annual selection of children book illustration.

Daniil Ivánovitch Iuvatchov was born in Saint Petersburg in 1905. He studies in german highschool “Peterschule”, where he learns english and german, and in 1924 he enters the Electrotecnical Institur of Leningrad (former Saint Petersburg), from which he is expelled. In 1927 he starts, with his friend and poet, Alexander Vvedensky, the ephemerous vanguardist group OBERIU. They manage to resist until 1930. Meanwhile, Harms and other writers connected with OBERIU, now in serious difficulties to survive, come to the attention of some children magazine publishers, such as "Yozh" (Hedgehog) and "Chizh" (Finch) and others, that knowledgeable that such techniques and experimentations were applicable too children literature, invite them to write for these publications. Two month after the nazi invasion of Soviet Union, on the 22nd of June 1941, Harms is arrested for the second time. We would die of hunger in prison, one year later. He was 37 years old.