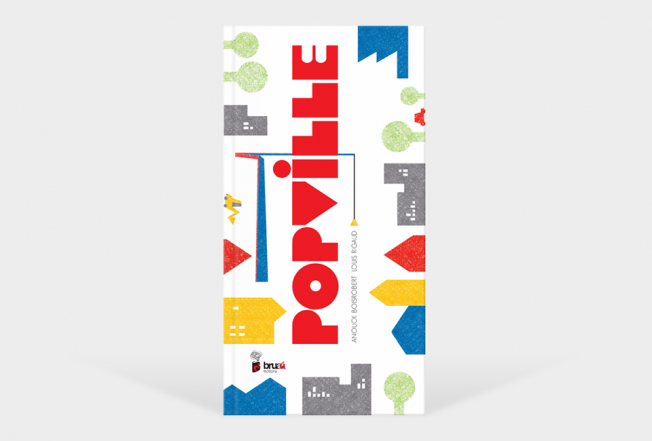 (…) a narrative about the evolution of an urban landscape, disarming in its simplicity…

Join the waitlist to be emailed when this product becomes available

When embarking on the pop-up technique, some authors haven’t been unable to resist the construction of a kind of book-show, where colors, shapes and volumes fight noisily among themselves. Perhaps this explains the reception that Popville had worldwide. A book that appeared counter-current, a true lesson of a rare sobriety and graphic elegance. On the first page of this book, where the stillness of a landscape marked by an isolated church, surrounded with trees, we find the first paragraph of a narrative about the evolution of an urban landscape, disarming in its simplicity, where we feel the passage of time page after page. A short film where each reader sets his script and its soundtrack, as the city grows and echoes in itself. Bruaá

Joy Sorman is a french writer born in 1973. Her first novel, Boys, boys, boys is published in 2005 and with it wins de Prix de Flore in the same year. In 2007, in collaboration with Gaëlle Bantegnie, Yamina Benahmed Daho and Stéphanie Vincent, publishes her second novel, 14 Femmes, pour un féminisme pragmatique. Besides writing, Goy Sorman is a regular commentator on the French TV network Paris Première.

Anouck Boisrobert is a graduated from the École Supérieure des Arts Décoratifs de Strasbourg, in design and illustration, Anouck Boisrobert name became worldwide known with the book Popville, co-created with Louis Rigaud. Beisides illustration, she enjoys working with multimedia cotents and organize workshops both with children and adults.

Louis Rigaud was born in 1985 and he’s a graduated from the École Supérieure des Arts Décoratifs de Strasbourg. Besides Illustrations, he increasingly shows more interest in projects that include both analogic and digital mediums. His debut in books happens in 2009, together with Anouck Boisrobert, with the Popville. “Wake up, Sloth!”, also co-created with Anouck was his second book.

IN THE BEGINING, THERE'S SOMETIMES ONLY A CHURCH WITH ITS BELFRY IN THE DISTANCE.