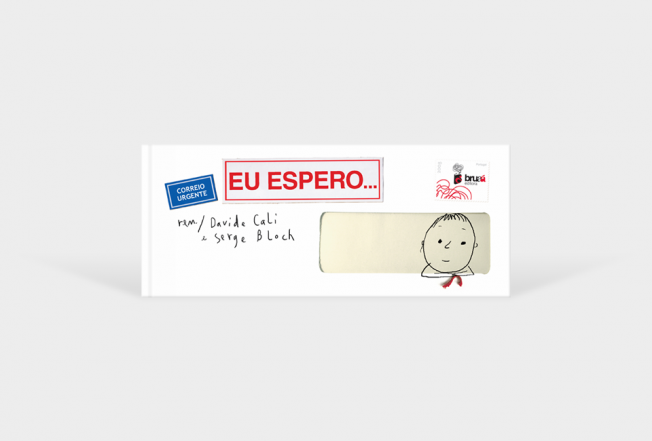 “I can’t wait…” is a book that speaks of the things you expect in life.

“I can’t wait…” is a book that speaks of the things you expect in life. When we are young, we expect little things: that the cake is tasty, that Christmas arrives, a kiss before falling asleep, then when we grow, we expect greater things: love or the end of the war. I’ve always made comics and humorous books, but recently I felt the need to write a book about the meaning of life. That’s how “I can’t wait…” was born. The book tells the things that happen in life with short sentences, but mostly with simple and tender images, created by Serge Bloch. Life is full of events happy or sad, the same goes for “I can’t wait…”: love, marriage, but also sickness and death. Although full of emotion, you can’t consider it a sad book. Maybe it’s my best book to date (…) Davide Cali

Davide Cali is one of the most original and acclaimed writers of children and adult picture books nowadays. Born in 1972, in Liestal, Switzerland, he lives in Italy. He started his carreer in Linus Magazine. Since 2000 he has written dozens of children books and won several prizes. Known for his versatility and creativity, Cali’s work can also be appreciated in comics, theatre and music. With Bruaá, Davide Cali has originaly published “A rainha das rãs não pode molhar os pés" and “Arturo”, his 50th book.

Serge Bloch is one of the most brilliant illustrators of his generation. Born in 1956, in Colmar, France, he made his studies at the École Supérieure des Arts Décoratifs de Strasbourg with Claude Lapointe. He regularly draws for the press, His work appears in The Washington Post, Wall Street Journal, Chicago Tribune, The New York Times, Los Angeles Times, Boston Globe , as weel in magazines like Time and New Yorker. He received the Society of illustrators golden medal . He lives in Paris with his wife and son, in which he inspired himself to create the super-hero Samsam.