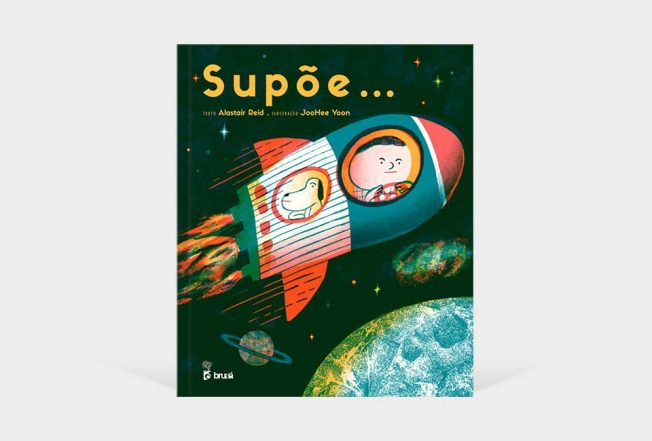 A singularly funny book, from a singularly writer, where every page starts with the word “Supposing”, sending us into a wide-range of scenarios filled with impossibility and sillyness.

A singularly funny book, from a singularly writer, where every page starts with the word “Supposing”, sending us into a wide-range of scenarios filled with impossibility and sillyness. We all know that there are lots of things we’re not supposed to do. Of course. But can we help ourselves not to think about them? Here’s a collection of the most eccentric possibilities that will surely springboard every reader’s imagination: “Supposing I could be any size I wanted to be…” ; “Supposing I collected old hair from a barber shop and sent it in parcels to people I didn’t like…” ; “Supposing a funny old fortune teller told me I was going on a journey and just to bamboozle her I stayed home for the rest of my life…”.
Supposing you read “Supposing… and you laugh so hard that you can’t stop for the rest of your life.

Alastair Reid was a poet, a prose writer, a translator, and a traveller. Born in Galloway, he served in the Royal Navy in wartime, and afterwards left Scotland to embark on a itinerant lifestyle that took him to number of different countries. His long immersion in the Spanish language led him to translating the poetry of a diverse group of Latin American writers, including Pablo Neruda, Jorge Luis Borges, Heberto Padilla, Eugenio Montejo, and José Emilio Pachedo. In the 1950s, he became a travelling correspondent for the New Yorker magazine. He published over 40 books - poems, essays, prose chronicles, children’s books and translations - and his writings have been widely translated. Reid died in 2014.

JooHee Yoon contributes regularly to publications, such as the New York Times and the New Yorker, in addition to working on books, advertising and various other projects. She has taught illustration and printmaking at the Rhode Island School of Design, along with leading workshops abroad. She is currently based in the US, but enjoys traveling to new places.